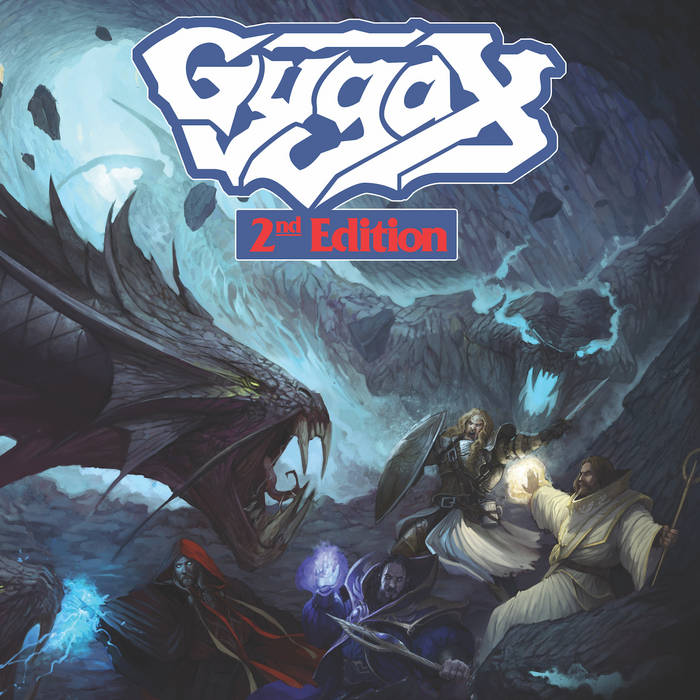 mark 2nd Edition is turbocharged and focused without losing its rawness and melodic boogie, this album fires on all cylinders and spins masterful song craft and lyrical spawned cosmos of adventure and epic fantasy.

mikebravo1-4 A solid sequel to Critical Hits, and a regular in my music rotation. If you're a fan of the old school sound (whatever name you want to put on it) then you are doing yourself a disservice if you don't give this album a spin. Favorite track: Heavy Meddle.

Jason Renslow The solo work and songwriting has only improved for Gygax on this second release. The way the 2 guitars work together is masterful. I never get tired of this music. Also, the nerdery theme is much appreciated. Roll some dice!

Southern California’s GYGAX – the lineup comprised of former and current members of Gypsyhawk, Skeletonwitch, Sorcerer, Huntress, Warbringer, Mantic Ritual, Pentagram, and more – has announced their highly anticipated sophomore LP release, Second Edition, due out March 16th via Creator-Destructor Records. The album will be unleashed while the band is storming the West Coast on tour in support of its release.

Following up where the band’s 2016-released Critical Hits debut left off, the eight tracks that comprise Second Edition showcase GYGAX’s unrivaled and potent tendency to create absolutely anthemic rock n’ roll hits, chock-full of hip’ shakin’ grooves and twin guitar explosions that would make Thin Lizzy shed a tear of pride. Second Edition was recorded in November of 2017 with Scott Goodrich at Nu-Tone Studios in Pittsburgh, California, and features the always incredible artwork of Rachel Deering.

GYGAX bassist/vocalist Eric Harris explains, “It is with happy hearts that we bring you our second collection of songs for your eager ears. Recording at Nu-Tone Studios was an experience of highest honor and we humbly thank Scotch The Scribe for his tireless efforts and mastered skills. We hope that you enjoy it as much as we do. And as always, we are ever in debt to the kind and gracious lords of Creator-Destructor Records. Your unending support is ever appreciated, adventurers. We will soon see you.”


Based out of Ventura, California, GYGAX presently features a four-piece lineup of musicians who are no strangers to the world of heavy metal; vocalist/bassist Eric Harris formerly of Gypsyhawk, Skeletonwitch, and Sorcerer (and currently also filling bass duties in Huntress), and his Gypsyhawk partner-in-crime, guitarist Bryant Throckmorton continues to play alongside Harris in GYGAX. Jeff Potts, previously of Warbringer and Mantic Ritual, joins on the other six-string, and rounding out the lineup perfectly is current Pentagram drummer Peter Campbell.

After rapidly creating buzz with their local live performances, GYGAX released their aptly titled debut LP Critical Hits in January 2016, garnering stellar reviews worldwide. The band completed a highly successful two-week US run in the Summer of 2016, which included a headline appearance at the first ever Magic & Metal Festival at the Majestic Theater in GYGAX’s hometown. In 2018, GYGAX is eager to embark on yet another successful chapter in their critical conquest, starting with a headlining West Coast tour in mid-March.

Track Name: Dice Throwers & Rock n' Rollers
Dice throwers and rock n rollers
We need you more than ever now
Shield bearers and denim wearers
We’ve got to play this story out

Wherever you are
Songs in the stars
Will cantillate their call
It is older than we know
---------------
Wherever you go
There’s always a glow
Swaddled in the sound
And it’s bound to hold you
Track Name: It Makes It Worth It
For fervid years we’ve lived the lives
From all the stories that lent themselves the lasting lines
And as the years have passed us by
Still after tales of wonder
Adventurers in wander

Found in the forge of fantasy
There lies a power that binds us for eternity
And for as far as we foresee
There will be no cessation
Long live imagination
Track Name: The Lascivious Underdark
Your intelligence induces salivation
And the essence of your mind gets me voracious
The curvature of lobes leaves me salacious
How I long to subjugate, it drives me crazy

Give! Me! Everything, I need you intellectually
Let me give you all my love
Oh! Please! Stay with me, I promise you I’ll never leave!
Our ascension isn’t far

From the first fall of my gaze, it came so clearly
I wanted to understand you most sincerely
Allure behind your eyes so fascinating
And the things that fill your head, so calculating
Track Name: Pure Hearts
Walking home with cradled tomes
Autumn leaves bring golden notes
Softest heart and kindest soul
The sort that sought love
Now I believe it was she who enchanted
And enraptured his affection
At his side, drawing his desire
Near the Transmuter’s Tower

For the going started slow
Passing ships for nights untold
What she saw glittered like gold
Though far more impressive
And I believe in greater meanings
What we mostly fail to see
Sorcery still lives, it seems
In the caring kind

Pure hearts to light the dark
And love to guide them
Pure hearts will leave their mark
For us to follow
Track Name: O'Ryant - Nocturne of Negligence
*rain*
Track Name: Song of the Silverhands
Side with the silent ones
Stand for everyone
Seeded within Faerun
We stasis soldiers
----
Balance, bestowing boon
Between the sun and moon
Sworn to servitude
We’ll see it through

Hang the harmful
Hold the mournful
Keep the peace in
True secrecy
-----
Knowledge wielded
Can help defend
Balance within
Pure harmony
Track Name: Wish
He was a dedicated magic mind
A spellguard aspirant, to be one of their kind
A scholar true, oh
-------
She strode in silence as she stepped inside
A sullen sadness loomed behind her eyes
Oh, so blue


The shifting world within her changing mind
Her lips against his, draining him of life
Too cruel
----------
Ever a lesson to the weaker kind
Don't deal with magic unknown to your mind
I tell you true
Track Name: Heavy Meddle
Foulest of vile beings
Who walk beneath our feet
To meddle with our dreams
You’ve taken everything

Sorrow forever keeps
Souls in despondency
Cursed forever be
One who had wrought such grief
Oh, my soul forever roams

She was my bride to be
And none matcher her beauty
Stolen away from me
My heart forever weeps
Oh no, she made me whole
Oh! Why!

Always will I seek you
Some days are just harder than before
My love come back to me
Only death is all I hold before
Track Name: Second Wind
You're surrounded, outnumbered; five to one
Tension building
And nowhere to run
Stand and fight though
You’re overwhelmed and overpowered
And how
Blinding flashes, pooling blood upon the floor

Bandcamp Daily  your guide to the world of Bandcamp

Featuring Oakland sounds from the Smart Bomb collective and Samplelov.